Atlas Academy 2011 successful
22 August - 3 September 2011
The Atlas Academy 2011 is now finished and was a success! The last days consisted of two days of Open House and a concert at the UITmarkt in the main hall of the Amsterdam Concertgebouw.

The Atlas Academy offered a wide range of daily activities:

1 Laboratory for the creation of intercultural music
Composers and musicians from all over the world come together to study and research the possibilities to create new intercultural music during two weeks of experimental sessions and workshops. >

3 Seminars and documentation
Lectures by invited guest speakers will address a variety of perspectives. The activities of the Atlas Academy will be documented (audiovisual and written) with the objective to build a comprehensive digital library.

4 Informal concerts and Open Days
Performances of traditional music will take place throughout the two weeks in informal concerts at the Public Library of Amsterdam. In the Open Days the harvest of the composers’ and musicians’ work will be presented in concerts open to the public at the Conservatorium.

The Atlas Academy is made possible with the financial support of the city of Amsterdam. 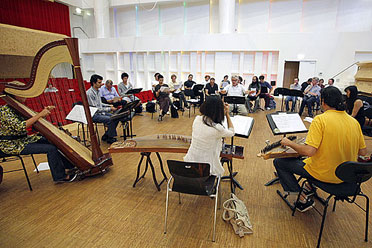 Atlas Ensemble
The Atlas Ensemble is a unique chamber orchestra uniting brilliant musicians from China, Central Asia, the Near East and Europe. The ensemble presents an unheard soundworld of western and non-western instruments. The repertoire consists entirely of specially commissioned works. >