From 20 to 31 August 2014 the Atlas Ensemble organized the fifth edition of the Atlas Academy at the Conservatorium van Amsterdam. The Atlas Academy is a laboratory for the creation of innovative intercultural music.

Composers and musicians applied to develop a piece or experiment during the two weeks, working closely with musicians from all over the world in individual or group sessions.

The Atlas Academy offered a wide range of activities:

1 Atelier for the creation of new repertoire
Composers and musicians from all over the world come together to study and research the possibilities to create new intercultural music during two weeks of experimental sessions and workshops.

4 Seminars and documentation
Lectures by invited guest speakers, among others Wim Henderickx, Christopher Trapani, Huib Schippers, addressed a variety of perspectives. The activities of the Atlas Academy were documented (audiovisual and written) with the objective to build a comprehensive digital library. 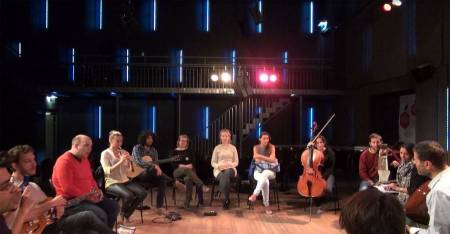