Artjom Kim was born 1976 in Bekabad, near Tasjkent, in Uzbekistan. He started his musical education (playing the bajan) at the age of ten. In 1995 he took his first composition lessons with the famous Uzbek composer M. Tadjiev and later with Dmitri Yanov-Yanovsky. In 2001 he received his Master s Degree at the Tashkent State Conservatory. During his studies he got involved with Ilkhom XX, the international contemporary music festival. Many of his compositions were premiered at this festival, while it also offered him an opportunity to start conducting: he conducted several first performances of music by young Uzbek composers, as well as Uzbek first performances of Requiem by Alfred Schnittke, Les Noces by Stravinsky and the Carmina Burana by Carl Orff. Artjom Kim regularly composes for film and theater. Over the past few years he was guest composer with the Nieuw Ensemble for which wrote four works: Stabilis/Mobilis, L'autre plaine, De Profundis and Rag Music for european and non-european instruments. In 2004 Kim has organized the Omnibus Ensemble in Tashkent, which has become the first chamber ensemble concentrated in modern music in Central Asia. Speaking about composing, Kim says: 'To me the most fascinating moment in music is when opposite processes in a composition collide, thus creating tension and energy. It is this energy that determines the development and form, and is my main motive for writing music'. 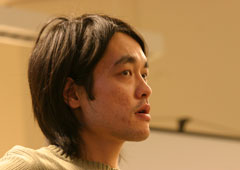 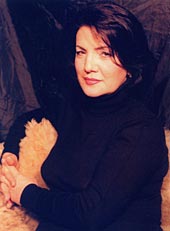 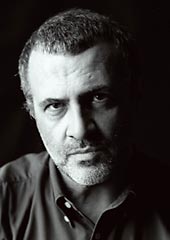 
Jack Body teaches composition, instrumentation and ethnomusicology at the Victory University of Wellington, New Zealand. He also contributes to studies in NZ music. He has lectured at Victoria University since 1980. Prior to that (1976-77) he was a guest lecturer at the Akademic Musik Indonesia in Yogyakarta. As a composer Jack Body has written works in most musical genres including ensemble, vocal, orchestral and electronic music, as well as film, music-theatre and installations. Significant premieres include his opera Alley, which was produced during the NZ International Festival in 1998. He was a featured composer at the Other Minds Festival of New Music in San Francisco in March 2003, and at the NZ International Festival in March 2004.
Current research projects include a large music-theatre work, Songs and Dances of Death and Desire, inspired by the New Zealand icon, trans-sexual Carmen Rupe. Jack Body’s ethnomusicological work includes producing a two-volume set of double CDs of instrumental music of the Yunnan minorities of South China, a collaboration with Zhang Xingrong of the Yunan Art Institute and Helen Rees (UCLA).
Jack Body is the editor of Waiteata Music Press. 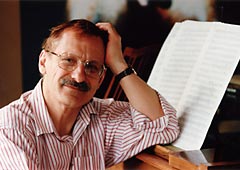 Joël Bons was born in Amsterdam. He studied guitar and composition at the Sweelinck Conservatory and visited the summer courses of Franco Donatoni in Siena and the Darmstädter Ferienkurse für Neue Musik. In Freiburg he continued his studies with Brian Ferneyhough. Bons composed chamber and ensemble works such as Attacca, Variations, Sextet, Tour, Bref, Draught, First Edition, Feeststuk, Flard and Tour à Tour. His music has been performed by the Asko Ensemble, Atlas Ensemble, Netherlands Wind Ensemble, Nieuw Ensemble, Radio Chamber Orchestra and Rotterdam Philharmonic Orchestra.

In 1980 Joël Bons co-founded the Nieuw Ensemble. He has been reponsable for virtually all programmering of this group. Besides he organised festivals such as Complexity? (1990), Rules and Games (1995), Improvisations (1996), the multi cultural Festival of Plucked Instruments (1998), and The Refined Ear (on microtonality, 2002). Bons has worked as free-lance artistic adviser for organisations such as the Holland Festival, Gaudeamus, ISCM (Dutch section), Donemus, Rotterdam Arts Council and the Concertgebouw. Bons supervised all cd recordings of the Nieuw Ensemble and produced a solo cd by violinist Irvine Arditti. Together with film director Frank Scheffer he made a television documentary on Boulez’ Eclat.

In 1988 Bons visited World Music Days in Hong Kong. He then traveled through China where he became aquainted with a new generation of Chinese composers. In 1991 the Nieuw Ensemble presented these remarkable talents to western audiences, which marked the international breakthrough of new Chinese music.
In 1998 Joël Bons and the Nieuw Ensemble were awarded the Prince Bernhard Fund Music Prize for their ‘markedly lively and adventurous programming which can be described as groundbreaking, both in the literal and figurative senses of the word’.
In 2002 Bons did artistic research in the Near East and Central Asia and founded the Atlas Ensemble, a unique chamber orchestra uniting musicians from China, Central Asia, the Near East and Europe. For his work with the Atlas Ensemble he was granted the prestigious Amsterdam Prize for the Arts 2005. Since 2005 he is lector/guest professor composition at the Amsterdam Conservatory. At the request of the Festival d’Automne à Paris Joël Bons is curator of the music programme of ‘Scène artistique du Moyen-Orient’, for which he visited the Middle East in the spring of 2007. 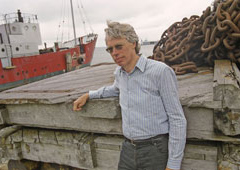 Jia Daqun was born in Shanghai in 1955. Following eight years of study as a painter at the Sichuan Fine Arts Institute, Jia Daqun abandoned a career in the visual arts when his vision became impaired. Undeterred, he decided to devote his attention to composition—a passion he had been developing while in art school. As a professor at the Shanghai Conservatory of Music and a respected composer of contemporary music, he has imported the principles of form, line and color from Chinese calligraphy and painting into his compositions and teachings. His compositions have been performed in Beijing, Shanghai, Chengdu (China), Tokyo, Sendai (Japan), Paris and New York. They have been performed by ensembles including The Central Philharmonic of China, The Choir Ensemble of the Central Philharmonic of China and the Chinese Instrumental Ensemble of the China Conservatory of Music. His works Rondo, for CL & Pro. (1984), The Dragon and Phoenix Totem for pipa [PEE paw] (Chinese plucked lute) and orchestra (1985) and Two Movements Symphony (1986) have won prizes in national composition competitions in China. String Quartet (1988) received the First Prize in the 12th Irino Foundation Prize for Chamber Music (1991) in Tokyo, Japan.


Evrim Demirel was born in Izmir, Turkey, in 1977. After he had finished primary school in Kusadasi he was accepted at the Izmir High School of Fine arts. Thereafter he entered the Theory Composition Department in the Faculty of Music and Performing Arts of Bilkent University, where he studied composition with Elhan Bakihanov for five years. He obtained his pre-graduate degree in this institute and decided to continue his education in The Netherlands. He was accepted at the Hogeschool voor Muziek en Dans in Rotterdam as a professional training student in both the Composition and Jazz Piano departments. For two years he has studied jazz piano with Rob van Kreeveld and currently he is studying jazz piano with Johan Clement and composition with Klaas de Vries. For the Nieuw Ensemble's young composers project Het Verfijnde Oor Evrim Demirel composed Telvin (2002), using Turkish microtonal makams. For the Asko Ensemble he recently wrote Zeybek and in April 2004 his Ottoman Miniatures was performed by the Holland Symfonia in the Project Jonge Componisten. The Estonian National Symphonic Orchestra performed Evrim Demirel’s orchestral piece Evolution. 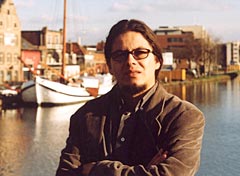 Javanshir Gulijev was born in 1950 in Sheki, Azerbaijan. He graduated from Azerbaijan State Conservatory (current name – Baku Music Academy), composition class by Jovdat Hajiyev, in 1976. Among his works – four symphonies, Ouverture for zurna and symphonic orchestra, string quartets, sonate for saz and violin, Many of the composer’s works have been performed by local and international soloists and ensembles in France, Romania, UK, Finland, Israel, USA, Poland etc. In 2000 he wrote Karavan for flute, saz and violoncello on commission by Silk Road Project of Yo-Yo Ma. Author of many songs, incidental music for film and theatre (for example, for Sergey Parajanov’s film Ashik Gerib). 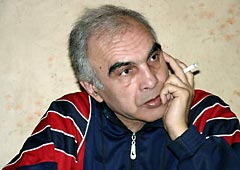 
Bun-Ching Lam Born in the Macau region of China, Bun-ching Lam began studying piano at the age of seven and gave her first public solo recital by 15. She holds a B.A. degree in Piano Performance from the Chinese University of Hong Kong and a Ph.D. in Music Composition from the University of California at San Diego. She has taught at Cornish College of the Arts in Seattle, and served as Visiting Professor at the Yale University School of Music and at Bennington College. She has received numerous awards including a Rome Prize, the highest award at the Shanghai International Composers’ Competition, two NEA grants, fellowships from the Guggenheim Foundation, the American Academy of Arts and Letters and the New York Foundation for the Arts. She has been commissioned by the American Composers Orchestra, New Jersey Symphony Orchestra, Hong Kong Chinese Orchestra, Macau Sinfonietta, Chamber Music America, CrossSound Festival, Bang On a Can Festival, Ursula Oppens and the Arditti String Quartet. She was the Music Alive! Composer-in-Residence with the New Jersey Symphony Orchestra during the 2000-2001 season. Bun-ching Lam’s works have been recorded on CRI, Tzadik, Nimbus and Koch International. Lam now lives and works in New York. 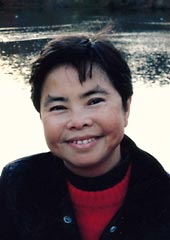 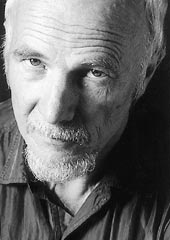 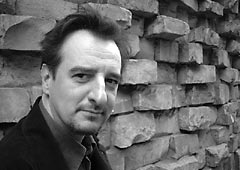 Seung-Ah Oh is a native of Korea. She received her BA and MM in composition from Ewha Woman’s University and MA and Ph. D. in composition and theory from Brandeis University. In 2003 she received a Masters Degree from the Conservatory of The Hague. She studied with Louis Andriessen, David Rakowski, Yehudi Wyner, Eric Chasalow, John Melby and Sung, Doo-Young. Seung-Ah Oh has participated in music festivals such as the Composers conference at Wellesley College, Norfolk Contemporary Music Workshop, June in Buffalo, the International Young Composer’s Meeting at Apeldoorn and the Aspen Music Festival. Her music has been performed by ensembles such as Soil Ensemble, Slagwerkgroep Den Haag, Orkest de Volharding, Poing (Norway), the New York New Music Ensemble, Ensemble Contrasts, Electra, Orkest de Ereprijs, The Mostly Modern Chamber Music Society, Lydian String Quartet and Speculum Musicae. Currently she is a visiting assistant professor at Oberlin conservatory. 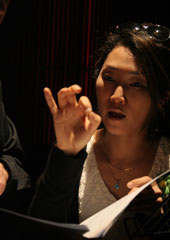 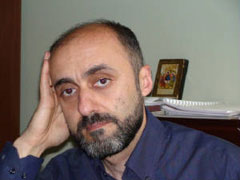 Toivo Tulev (Tallinn 18.07 1958) has studied at the Tallinn 7th Secondary School and during 1976-1980 at the G. Ots Tallinn Music High School where his teacher of theory and composition was Anti Marguste. In 1990 he graduated from the Tallinn Conservatoire of the professor Eino Tamberg’s composition class. Toivo Tulev has privately furthered his education with Sven David Sandström at the Higher Music School of Stockholm (1991) and studied electro-acoustic music at the Higher Music School of Cologne (1996). During 1995-1998 he pursued a master’s degree at the Estonian Music Academy.
Toivo Tulev has worked as a choralist at the Estonian Philharmonic Chamber Choir (1981- 1988) and has thereafter performed with various vocal groups, such as Vox clamantis, Choeur Gregoriaen de Paris and Heinavanker. He is the founder and artistic manager of the Scandicus ensemble (1995). Toivo Tulev has also taught music theory related subjects, Gregorian song and composition at the G. Ots Tallinn Music High School. He is currently a freelance musician.
His work Opus 21 for chamber orchestra was selected to be among the top ten works in the 1996 Rostrum festival in Paris and the production was also performed at the Tokyo new music festival Composium 1998 dedicated to Toru Takemitsu. His production Quella Sera for chamber orchestra (1996) was written for the London Baltic Arts festival. 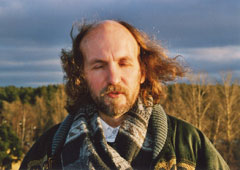 Guo Wenjing'smusic is often mysterious and ominous, imbued with the witchcraft and folk music of the region of his birth. His prolific output includes a choral symphony, two operas, four concertos, two symphonic poems, one overture for orchestra and band, and chamber music. He also wrote the music for twenty films and twenty-five television films. Guo Wenjing was born in 1956 in Sichuan, a mountainous province of China. He began to study the violin on his own when he was eleven years old. Between 1970 and 1977 he was a member of the Chongqing Song and Dance Ensemble, where he learnt a great deal about Sichuan folk music. In 1978 he enrolled at the Beijing Central Conservatory and graduated in composition in 1983. Guo still lives and works in Beijing. He is composition teachter at his alma materand a member of the Chinese Musicians’ Association.
Commenting on his work, Guo remarks, When I compose, I write the score out immediately. I make no sketches. Tone colour is a major concern of mine, thus I have to try to notate the sounds I hear in my mind as directly and concretely as possible. 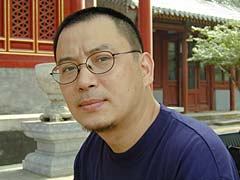